skip to main | skip to sidebar

Here's a picture I drew to help promote a Kickstarter project for Ratha's Creature, which will be a graphic novel based on one of my favorite books as a kid (which is also a great read for adults), by the wonderful Clare Bell. Though the Kickstarter has ended, pre-orders for the ebook and paperback versions can still be made here. 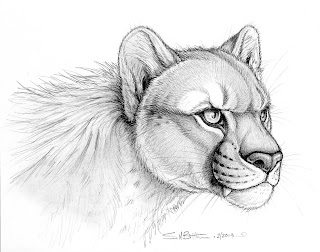 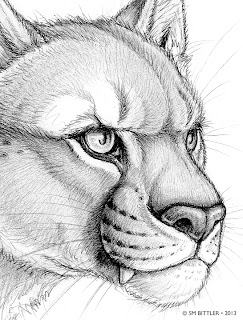 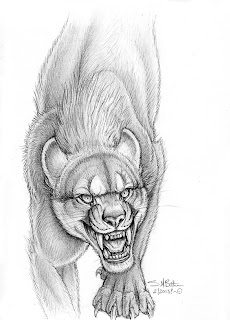 Note, I'm not involved with the project myself, but I love the book (and series), and I had a little time to draw while recently snowed in (we got over 30"!), so I hoped to help by drawing and spreading the word. I have been a huge fan of the Named series (Ratha's Creature, Clan Ground, etc.) since I was a kid in the 80's, and have been dying to do new fanart, so here's my little homage to a fantastic character from a wonderful author of an excellent series.

The first drawing is how I saw Ratha in my head when I first read the books. Now, I understand her species (a sentient prehistoric big cat) looks more cheetah-like now, but back in the 80's I had pictured her as a kind of puma/leopard mix, with some prehistoric sabertooth too, so that's what I drew (the author herself encourages artists to draw The Named as they see them, which I think is fantastic). The second is a detail, and the third is a big male "UnNamed" as I saw them in the book. This could be Shongshar from Clan Ground, but I think he would have somewhat longer saberteeth, so this might just be a random UnNamed instead.

Good Luck and Best Wishes to the Ratha Project! :D

S.M. Bittler
I'm a full-time graphic designer/ illustrator by trade, though I draw for myself and others when I can. I love to include elements and symbolism from various cultures in my art.